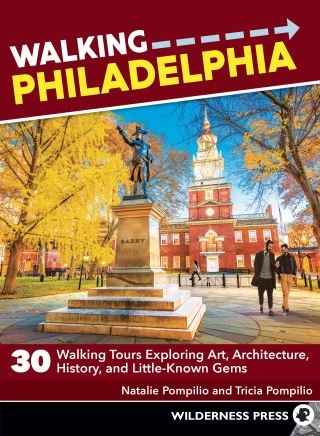 From Broad Street to Independence National Park, from Manayunk to the Delaware River, the City of Brotherly Love is one of the world’s most fascinating places to explore. Grab your walking shoes, and become an urban adventurer. Local author Natalie Pompilio leads you on 30 self-guided walking tours in this comprehensive guidebook.

Walking Philadelphia makes you feel like you’re being led by your closest friend as you soak up the architecture, trivia, and more. The tours include important historic facts, as well as Natalie’s behind-the-scenes stories and tidbits. Plus, Tricia Pompilio’s photography brings these walking tours to life.

Find vintage boutiques and high-end shopping destinations. Try restaurants that showcase famed fare (like cheesesteaks, pretzels, and beer that make Philadelphia a foodies’ paradise). Discover Philadelphia’s many firsts: the first zoo, first library system, and first hospital—plus dozens of historic sites that you learned about in school. Explore a Museum District that’s second to none, an all-encompassing park system, America’s Most Historic Square Mile, and much more.

Whether you’re looking for the Mural Mile in Center City or the historically modern charm of Society Hill, Walking Philadelphia will get you there. Find a route that appeals to you, and walk Philly!

Freelance journalist Natalie Pompilio lives and writes in a house on an alley off an alley in South Philadelphia. A former staff writer with The Philadelphia Inquirer and The Philadelphia Daily News, she loves hearing and telling stories. Her idea of a perfect night is sitting on her roof deck at dusk with her husband, Jordan Barnett, their two cats, and a bottle of wine while watching the chimney swifts emerge for their nightly dance. This is her third book featuring Philadelphia. More Philadelphia Murals and The Stories They Tell, with coauthors Jane Golden and Robin Race, was released by Temple University Press in 2006. She partnered with New Orleans photographer Jennifer Zdon to self-publish the children’s alphabet book Philadelphia A to Z in 2010.

Tricia Pompilio is a lifestyle and portrait photographer based in Philadelphia. After 15 years in television, she decided to focus on her children and her photography. When she’s not following her husband, Vince Savarese, and their three daughters—Fiona, Luna, and Poppy—with a camera, she’s probably re-reading Harry Potter 1–7 with her two black cats while Rob Thomas sings softly in the background.