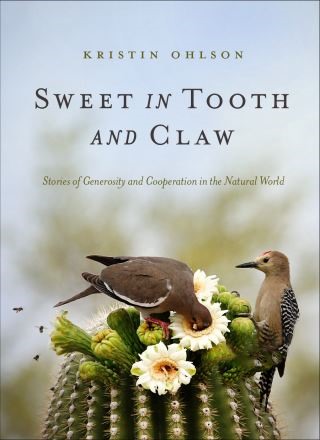 Sweet in Tooth and Claw

Stories of Generosity and Cooperation in the Natural World

What if Nature is more cooperative, and less competitive, than we think?

A follow-up to Kristin Ohlson’s previous book, The Soil Will Save Us (Rodale 2014), Sweet in Tooth and Claw extends the concept of cooperation in nature to the life-affirming connections among microbes, plants, fungi, insects, birds, and animals – including humans—in ecosystems around the globe.

For centuries, people have debated whether nature is mostly competitive -- as Darwin theorized and the poet Tennyson described as “red in tooth and claw”—or innately cooperative, as many ancient and indigenous peoples believed. In the last 100 or so years, a growing gang of scientists have studied the mutually beneficial interactions that are believed to benefit every species on earth. This book is full of stories of generosity – not competition -- in nature. It is a testament to the importance of a healthy biodiversity, and dispels the widely accepted premise of survival of the fittest.

Ohlson tells stories of trees and mushrooms, beavers and bees. There are chapters on a wide variety of ecosystems and portraits of the people who learn from them: forests (the work of Suzanne Simard); scientists who study the interaction of bees and flowers in the Rocky Mountains; the discovery of bacteria and protozoa in the mid-1600s by Dutch scientist Antoni von Leeuwenhoek; ranchers, government agency personnel, and scientists working together to restore wetlands from deserts in northeastern Nevada; and more. It is a rich and fascinating book full of amazing stories, sure to change your perspective on the natural world.

Ohlson’s last book was The Soil Will Save Us: How Scientists, Farmers and Foodies are Healing the Soil to Save the Planet, which the Los Angeles Times called “a hopeful book and a necessary one…. a fast-paced and entertaining shot across the bow of mainstream thinking about land use.” She appeared in the award-winning documentary film, Kiss the Ground, to speak about the connection between soil health and climate health. Ohlson lives in Portland, Oregon.