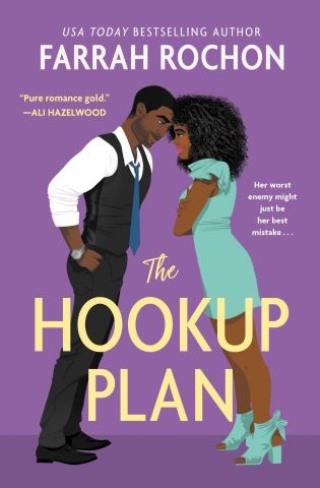 Successful pediatric surgeon London Kelley just needs to find some balance and de-stress. According to her friends Samiah and Taylor, what London really needs is a casual hookup. A night of fun with no strings. But no one—least of all London—expected it to go down at her high school reunion with Drew Sullivan, millionaire, owner of delicious abs, and oh yes, her archnemesis.

Now London is certain the road to hell is paved with good sex. Because she’s found out the real reason Drew’s back in Austin: to decide whether her beloved hospital remains open. Worse, Drew is doing everything he can to show her that he’s a decent guy who actually cares. But London’s not falling for it. Because while sleeping with the enemy is one thing, falling for him is definitely not part of the plan.

Farrah Rochon:
USA Today bestselling author Farrah Rochon hails from a small town just west of New Orleans. She has garnered much acclaim for her Holmes Brothers, New York Sabers, Bayou Dreams and Moments in Maplesville series. When she is not writing in her favorite coffee shop, Farrah spends most of her time reading, cooking, traveling the world, visiting Walt Disney World, and catching her favorite Broadway shows. An admitted sports fanatic, Farrah feeds her addiction to football by watching New Orleans Saints games on Sunday afternoons.