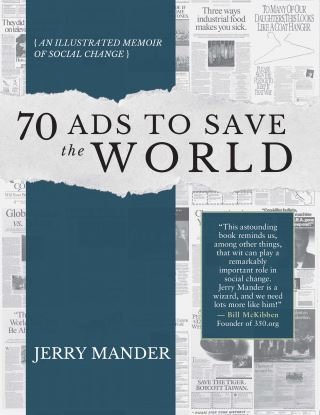 70 Ads to Save the World

An Illustrated Memoir of Social Change

70 Ads to Save the World: An Illustrated Memoir of Social Change offers a detailed and entertaining account of the groundbreaking work of advertising visionary, Jerry Mander.

Chronicling his evolution from corporate advertising to non-profit and political advertising work, Mander takes readers on a journey through the origin stories of some of the most memorable anti-establishment campaigns from the second half of the 20th century.  Many of Mander’s ads and campaigns for environmental and social justice issues were not only memorable decades ago, they remain relevant today.

As Mander explains in this  book, he wrote several ads in the 1980s focused on abortion and reproductive rights for Planned Parenthood, and his team at Public Media Center took aim at the National Rifle Association in support of gun control. In 1966, Mander wrote an ad calling out the absurdity of a then newly-announced Pentagon initiative to drop toys over Vietnam, which resulted in a visit from the FBI.

A trailblazer in the pre-internet age, Mander’s strategies included bold calls to action. In work for the Sierra Club, for example, Mander helped produce print ads that featured letters to legislators readers could clip out and mail, a tactic at the time more commonly reserved for retail coupons.

Throughout 70 Ads to Save the World, Mander explains how these campaigns came to be and offers advice for fellow low-budget, high-impact do-gooders. A personal accounting of his own work gives readers a primer on innovative thinking, while illuminating his inspiring story of aligning personal vision with collective impact.

Jerry Mander: Jerry Mander is the founder, former director, and distinguished fellow of the International Forum on Globalization (IFG), a San Francisco-based think tank focused on exposing the negative impacts of economic globalization, and the need for economic transitions toward sustainable local economies. In addition to his role at IFG, Mander is the former program director for the Foundation for Deep Ecology, and founder and director of the Public Media Center. In the 1960s Mander served as president of a major San Francisco advertising company before turning his talents to environmental campaigns that kept dams out of the Grand Canyon, established Redwood National Park, and stopped production of the Supersonic Transport. His has authored, edited and co-edited many books including The Capitalism Papers; Fatal Flaws of an Obsolete System (2013), Four Arguments for the Elimination of Television (1977), In the Absence of the Sacred (1991), The Case Against the Global Economy with Edward Goldsmith (1996), Alternatives to Economic Globalization: A Better World is Possible (2004), Paradigm Wars, Indigenous Peoples’ Resistance to Globalization, and  70 Ads to Save the World: An Illustrated Memoir of Social Change (2022).