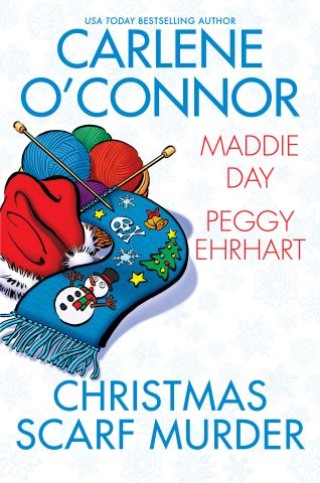 SCARFED DOWN by MADDIE DAY
It’s beginning to taste a lot like Christmas at Pans ‘N Pancakes, as twelve days of menu specials dazzle hungry locals. But the festivities go cold the instant a diner dies while knitting a brilliant green scarf. With Aunt Adele tied into a murder investigation, it’s all on Robbie Jordan to find out who’s really been naughty or nice in South Lick, Indiana.

DEATH BY CHRISTMAS SCARF by PEGGY EHRHART
Suspects pile up faster than New Jersey snow when frosty-tempered Carys Walnutt is found strangled by a handmade scarf auctioned at Arborville’s tree-lighting ceremony. Between a winning bidder hiding behind the alias “S. Claws” and a victim who deserved coal in her stocking, can Pamela Paterson and the crafty Knit and Nibble ladies freeze a killer’s merry murder plot?

Carlene O'Connor:
USA Today bestselling author Carlene O’Connor comes from a long line of Irish storytellers. Her great-grandmother emigrated from Ireland filled with tales and the stories have been flowing ever since. Of all the places across the pond she’s wandered, she fell most in love with a walled town in County Limerick and was inspired to create the town of Kilbane, County Cork. Carlene currently divides her time between New York and the Emerald Isle.
|||Agatha and Macavity finalist author Maddie Day is a talented amateur chef who knows both Indiana and Cape Cod intimately. She is a member of Sisters in Crime and Mystery Writers of America and blogs with the Wicked Authors and at Killer Characters. Day lives with her beau north of Boston, where she gardens, cooks, and devises new murderous plots. She hopes you’ll find her at maddiedayauthor.com.

|||Peggy Ehrhart is a former English professor who lives in Leonia, New Jersey, where she writes mysteries and plays blues guitar. She holds a Ph.D. in medieval literature from the University of Illinois and taught writing and literature at Queens College, CUNY, and Fairleigh Dickinson University, where she was a tenured full professor. Her short stories have appeared in Futures Mystery Anthology Magazine, Crime and Suspense, Flashing in the Gutters, Spinetingler, Crime Scene: New Jersey 2, and Murder New York Style. A longtime member of Mystery Writers of America and Sisters in Crime, Peggy served on the board of MWA New York as head of the Mentor Committee. She was president of Sisters in Crime NY/TriState from 2013 to 2015. Peggy regularly attends mystery-writing conferences and participates in conference panels and also gives talks on mystery fiction at libraries in New York, Connecticut, and New Jersey.