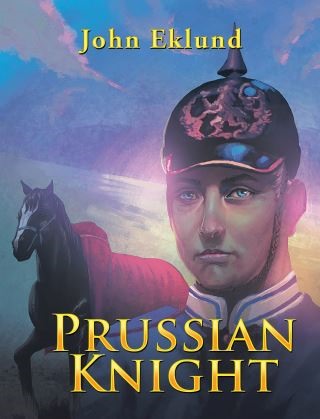 I n the fall of 1831, 114 years years before his beloved homeland would be erased from the face of the earth, the future crown prince of the kingdom of Prussia is born in his family’s palace. As time would tell, Frederick III could not have been born at a more relevant moment. While growing up, Fritz becomes a dedicated student who is fascinated with the intricate yet difficult history of his people. As his royal tutor leads Fritz back in time, he learns about the glorious heroes that transformed Prussia into a powerful nation that gained its status not through wealth or natural resources but through the unrivaled discipline and sheer determination of its people. While the crown prince learns about the Teutonic Knights, Tannhäuser, and the horrors that befell his ancestors, he is taken on a fascinating journey into the past that eventually leads him full circle into the present where he becomes a hero himself. Prussian Knight blends historical facts with legend while telling the compelling tale of the storybook rise and cataclysmic fall of Europe’s most honorable, yet tragic, race, and the heroes who helped build a powerful nation.

John Eklund: John Eklund is a Northern European history buff and author of the historical fiction novels, The Third Testament, Siegfried, Liberator of Germania, and The Last of the Vikings. He resides with his wife, Jennifer, three children, and three dogs in the Chicago suburbs.