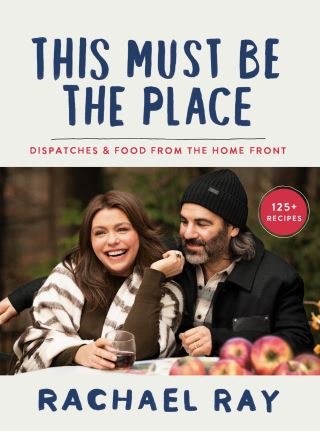 This Must Be the Place

Dispatches & Food from the Home Front

NEW YORK TIMES BESTSELLER • Rachael Ray presents 125+ recipes straight from her home kitchen in upstate New York, with personal stories on loss, gratitude, and the special memories that make a house a home.

“I wanted to write this book because for the first time in my fifty-two years, everyone on the planet was going through the same thing at the same time. We were all feeling the same fear, heartsickness, worry, and sadness, but due to the nature of the virus, it was hard to connect. I connect through cooking, and I noticed that’s what many others were doing as well. We took to the kitchen to share something of ourselves—and cooking became the discipline, diversion, and devotion that got us through.”

You may think you know Rachael Ray after decades of TV appearances and dozens of books, but 2020 changed us all and it changed her, too—her life and her direction. During the early months of the pandemic in upstate New York, far away from her New York City television studio, Rachael Ray and her husband, John, went to work in their home kitchen hosting the only cooking show on broadcast TV. At her kitchen counter, with the help of her iPhone cameraman (John), Rachael produced more than 125 meals—everything from humble dishes composed of simple pantry items (One-Pot Chickpea Pasta or Stupid Good, Silly Easy Sausage Tray Bake) to more complex recipes that satisfy a craving or celebrate a moment (Porcini and Greens Risotto or Moroccan Chicken Tagine).

This Must Be the Place captures the words, recipes, and images that will forever shape this time for Rachael and her family, offering readers inspiration to rethink and rebuild what home means to them now.

Rachael Ray: Rachael Ray is a multi-Emmy Award-winning syndicated television star, an iconic Food Network personality, a bestselling cookbook author, founder and editorial director of her own lifestyle magazine, Rachael Ray In Season, and founder of the Yum-o! organization and The Rachael Ray Foundation. She splits her time between New York City and the Adirondacks with her husband, John, her family, and her beloved pit bull, Bella Boo Blue.