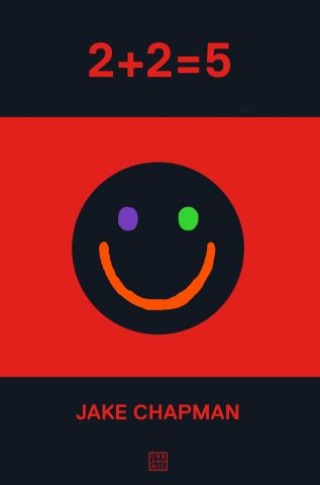 A riotous new take on a classic fictional dystopia, with an all-you-can-eat quinoa buffet of wrongthink.


With 2+2=5, George Orwell's flawed masterpiece finally receives a much-needed rectification, as Jake Chapman takes us on a bad trip into an atrocious alt-Eurasia--a nightmare utopia of 24/7 self-expression, mandatory wellbeing, yogic breathing, and promiscuous empathy. Yippie wonks in open-toed sandals have ejected the evil capitalist overlords, compassion and charity reign supreme, buckwheat salad and artisan cashew cheese are in plentiful supply, and all strive to live their best life, all the time.

Employed by the Ministry to rectify misfortunes issuing from a curious glitch in the system, Winston Smith finds that his creative urges are unexpectedly awoken, and he is driven to express his deepest place, voice, and hurt through the medium of poetry. But what connects Winston's furtive scribblings in My Big Book of Me to the unpleasantnesses emanating from the deep glitch? Is Julia really the perfect kooky carefree soulmate she seems to be? Can O'Brien be trusted? And when does the new season of Big Brother start?

An all-you-can-eat quinoa buffet of wrongthink, Chapman's twisted vision is a bracing reminder that dystopia is just wishful thinking, and that the worst can always get worster.

Jake Chapman: Jake Chapman is a British artist known worldwide for his iconoclastic sculpture, prints and installations. Since their graduation from the Royal College of Art in 1990, he has worked together with his brother Dinos; the Chapmans first received critical acclaim in 1991 for the diorama sculpture Disasters of War, and since then they have exhibited extensively in solo and group shows. In 2015, Jake directed The Marriage of Reason and Squalor, a film based on his first novel of the same title. This book was followed by Memoirs of My Writer's Block and INTROSPASTIC: From the Blackened Beyond.