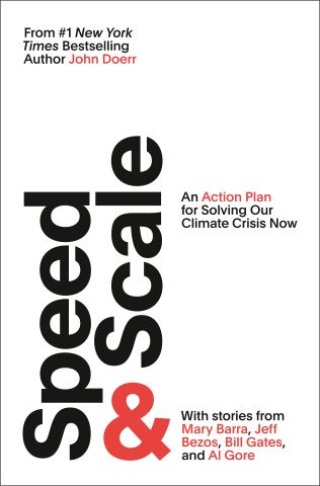 An Action Plan for Solving Our Climate Crisis Now

In 2006, John Doerr was moved by Al Gore’s An Inconvenient Truth and a challenge from his teenage daughter: “Dad, your generation created this problem. You better fix it.” Since then, Doerr has searched for solutions to this existential problem—as an investor, an advocate, and a philanthropist.

Fifteen years later, despite breakthroughs in batteries, electric vehicles, plant-based proteins, and solar and wind power, global warming continues to get worse. Its impact is all around us: droughts, floods, wildfires, the melting of the polar ice caps. Our world is squarely in a climate crisis and on the brink of a climate disaster.

Yet despite our state of emergency, climate change has yet to be tackled with the urgency and ambition it demands. More than ever, we need a clear course of action.

What if the goal-setting techniques that powered the rise of today's most innovative organizations were brought to bear on humanity's greatest challenge? Fueled by a powerful tool called Objectives and Key Results (OKRs), SPEED & SCALE offers an unprecedented global plan to cut greenhouse gas emissions before it’s too late. Used by Google, Bono’s ONE foundation, and thousands of startups the world over, OKRs have scaled ideas into achievements that changed the world. With clear-eyed realism and an engineer’s precision, Doerr identifies the measurable OKRs we need to reduce emissions across the board and to arrive by 2050 at net zero—the point where we are no longer adding to the heat-trapping carbon in the atmosphere.

By turns pragmatic and inspiring, SPEED & SCALE intersperses Doerr’s wide-ranging analysis with firsthand accounts from Jeff Bezos, Christiana Figueres, Al Gore, Mary Barra, Bill Gates, and other intrepid policy leaders, entrepreneurs, scientists, and activists. A launchpad for those who are ready to act now, this book is geared to leaders in every walk of life. With a definitive action plan, the latest science, and a rising climate movement on our side, we can still reach net zero before it is too late. But as Doerr reminds us, there is no more time to waste.

John Doerr: John Doerr is an engineer, venture capitalist, the chairman of Kleiner Perkins, and the author of the best-selling Measure What Matters. He was an original investor and board member at Google and Amazon, helping to create more than half a million jobs. A pioneer of Silicon Valley’s clean tech movement, Doerr has invested in zero emission technologies since 2006. He's passionate about encouraging leaders to reimagine the future, from transforming healthcare to advancing applications of machine learning. Outside Kleiner Perkins, Doerr works with social entrepreneurs who are tackling systemic issues across climate, public health, and education.

Ryan Panchadsaram is an engineer and investor focused on solving systemic, societal challenges. At Kleiner Perkins, Ryan serves as technical advisor to John Doerr, where he invests in founders and technologies that aim to change the world. Ryan and John collaborated on Speed & Scale and number one bestseller Measure What Matters. Under President Obama, Ryan was Deputy Chief Technology Officer of the United States, where he championed entrepreneurship, innovation, and open data.