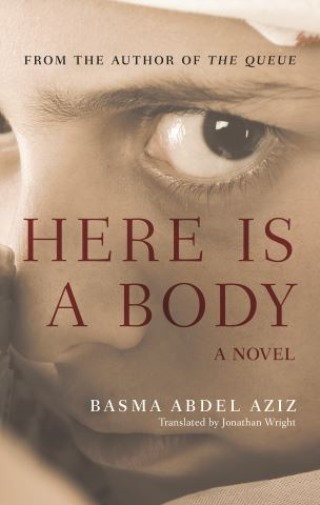 Here Is a Body

In this follow-up to her PEN Award-winning novel, The Queue, an electrifying new voice in Arab women’s fiction passionately brings to life the machinations of state oppression

Mysterious men are rounding up street children and enrolling them in a so-called “rehabilitation program,” designed to indoctrinate them for the military-backed regime’s imminent crackdown on its opponents. Across town, thousands of protesters encamp in a city square demanding the return of the recently deposed president.

Reminiscent of recent clashes in Egypt and reflective of political movements worldwide where civilians face off against state power, Abdel Aziz deftly illustrates the universal human struggles between resisting and succumbing to an oppressive regime.

Here Is A Body is a courageous and powerful depiction of the state cooptation of human bodies, the dehumanization of marginalized groups, and the use of inflammatory religious rhetoric to manipulate a narrative.

Basma Abdel Aziz: Basma Abdel Aziz is an award-winning writer, sculptor, and psychiatrist, specializing in treating victims of torture. A weekly columnist for Egypt’s al-Shorouk newspaper, she was named a Foreign Policy Global Thinker, and a Gottlieb Duttweiler Institute top influencer in the Arab world. A long-standing vocal critic of government oppression in Egypt, she is the winner of the Sawiris Cultural Award, the General Organization for Cultural Palaces Award, and the Ahmed Bahaa-Eddin Award. Her critically acclaimed debut novel The Queue won the English PEN Translation Award and has been translated into Turkish, Portuguese, Italian, and German. She lives in Cairo.