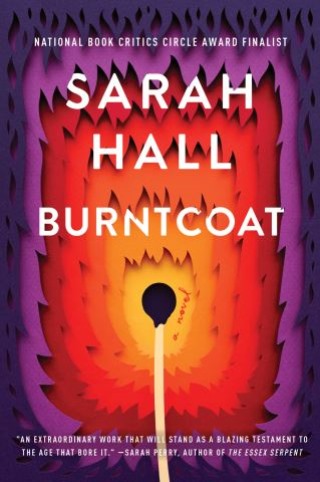 "An extraordinary work that will stand as blazing witness to the age that bore it.” -- Sarah Perry

A "masterpiece" (Daisy Johnson) of mortality, passion, and human connection, set against the backdrop of a deadly global virus—from the Booker–nominated writer

You were the last one here, before I closed the door of Burntcoat. Before we all closed our doors . . .

In an unnamed British city, the virus is spreading, and like everyone else, the celebrated sculptor Edith Harkness retreats inside. She isolates herself in her immense studio, Burntcoat, with Halit, the lover she barely knows. As life outside changes irreparably, inside Burntcoat, Edith and Halit find themselves changed as well: by the histories and responsibilities each carries and bears, by the fears and dangers of the world outside, and by the progressions of their new relationship. And Burntcoat will be transformed, too, into a new and feverish world, a place in which Edith comes to an understanding of how we survive the impossible—and what is left after we have.

A sharp and stunning novel of art and ambition, mortality and connection, Burntcoat is a major work from “one of our most influential short story writers” (The Guardian). It is an intimate and vital examination of how and why we create—make art, form relationships, build a life—and an urgent exploration of an unprecedented crisis, the repercussions of which are still years in the learning.

Sarah Hall was born in Cumbria. She is the prizewinning author of six novels and three short story collections. She is a recipient of the American Academy of Arts and Letters E. M. Forster Award, Edge Hill Short Story Prize, among others, and the only person ever to win the BBC National Short Story Award twice.