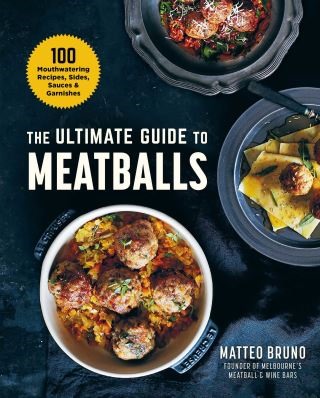 The Ultimate Guide to Meatballs

Meatballs like you've never seen them before—these recipes take the humble meatball to a whole new tasting experience and includes recipes for fish and vegetables as well.

A meatball is one of the simplest recipes you can make, they can be made out of almost anything, and everyone loves them! They make the perfect dish for a Monday night family dinner, finger food for a Sunday football feast, or bulk cooking for meal prep throughout the week. Here are 60 innovative and downright delicious recipes like you've never seen before, including vegetarian (meat)balls:


Almost as important as the main dish is what they are served with. Select from 20 ideas for sotte palle (literally "underneath the balls"), from Creamy Polenta or Roasted Fennel to Wasabi Slaw, Cheesy Bread, or Toasted Quinoa. Top with one of the 20 simple, mouthwatering sauces such as Aioli, Red Wine and Onion, or Creamy Mushroom. Finally, sprinkle with some truffle salt or crushed pistachios—and tuck in.

Matteo Bruno: Matteo Bruno is a film and television producer with several feature films and many hours of broadcast television credits to his name, including Stefano's Cooking Paradiso and Ask the Butcher. Descending from a family of French and Italian cattle farmers, he grew up with a strong appreciation for food and knowledge of where food comes from. After his career in film and television, Matteo launched Flinders Lane Food & Beverage Company, importing the finest Italian wines and representing some of Australia's most celebrated wine makers, and also culminating his three successful Melbourne Meatball & Wine Bars.