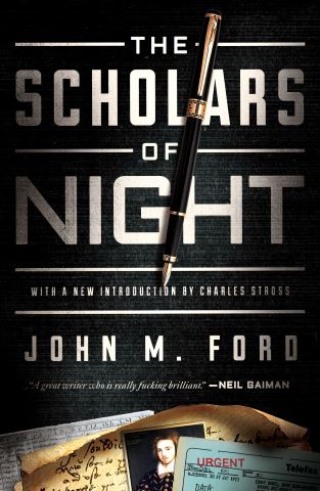 The Scholars of Night

John M. Ford's The Scholars of Night is an extraordinary novel of technological espionage and human betrayal, weaving past and present into a web of unbearable suspense.

Nicholas Hansard is a brilliant historian at a small New England college. He specializes in Christopher Marlowe. But Hansard has a second, secret, career with The White Group, a “consulting agency” with shadowy government connections. There, he is a genius at teasing secrets out of documents old and new—to call him a code-breaker is an understatement.

When Hansard’s work exposes one of his closest friends as a Russian agent, and the friend then dies mysteriously, the connections seem all too clear. Shaken, Hansard turns away from his secret work to lose himself in an ancient Marlowe manuscript. Surely, a lost 400 year old play is different enough from modern murder.

He is very, very wrong.

At the Publisher's request, this title is being sold without Digital Rights Management Software (DRM) applied.

John M. Ford: John M. Ford (1957-2006) was a science fiction and fantasy writer, game designer, and poet whose work was held in high regard by peers ranging from Neil Gaiman to Robert Jordan to Jo Walton to Roger Zelazny, alongside innumerable others. His novels include the World Fantasy Award-winning The Dragon Waiting, the Philip K. Dick Award-winning Growing up Weightless, and the contemporary thriller The Scholars of Night. His debut novel Web of Angels (1980) has been called “cyberpunk before there was cyberpunk.” He spent the latter decade-and-a-half of his writing life in Minneapolis, Minnesota.