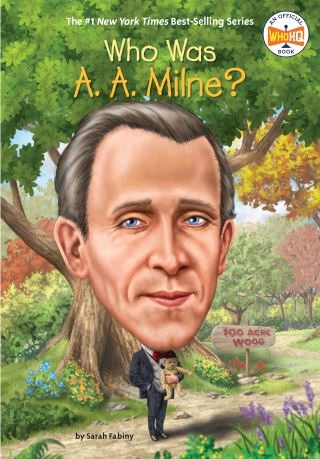 Find out how stories about his son's stuffed bear, famously known as Winnie the Pooh, made A. A. Milne one of the world's best-known children's authors in this informative biography from the #1 New York Times Best-Selling Series, Who Was?.

Born in England in 1882, Alan Alexander Milne grew up with a love for exploring the woods with his brother and writing poems about their adventures. Alan carried that love into his adult life by exploring the woods with his son, Christopher Robin. Well known for his articles, plays, and novels, Alan considered himself a "serious" author. But one story about a stuffed bear changed his image forever. Inspired by his son and their time playing in the woods, Alan wrote a story about Christopher Robin and his stuffed bear, Winnie-the-Pooh, on a hunt for honey. The story was an instant success, and soon everyone wanted to hear more about the boy, his bear, and the magical Hundred Acre Wood. Today, children all around the world still read his stories in the classic books Winnie-the-Pooh, The House at Pooh Corner, Now We Are Six, and When We Were Very Young.