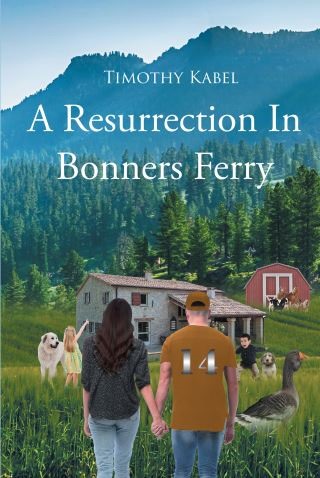 A Resurrection In Bonners Ferry

A Resurrection in Bonners Ferry is the story of Lawrence Greenwood, a federal parole officer living in Connecticut who has reached a crossroads in his life. He is turning fifty, his marriage to Nilda is in its death throes, and his career is winding down. Lawrence finds joy and comfort in the strong relationships he has built with his three children, Thomasina, Meredith, and Nathan, who is about to make his Major League debut as a pitcher for the expansion Kentucky Colonels. However, a twist of fate sends Lawrence's life in a completely unexpected direction.

Lawrence forges a new beginning as a farmer in Bonners Ferry, Idaho. He is surrounded by odd and quirky characters, including Martin "Soaring Hawk" Tuttle, an unwelcome squatter on Lawrence's land, and Abraham and Doreen Redfeather, a divorced Native American couple who become Lawrence's closest friends. He also meets the enigmatic Jasper Crowley, who appears at the most unexpected times. Lawrence encounters multiple complications in trying to live a simple life in the country. He explores a potential romance with his former protégé, Kelly Larson, and forms an unlikely friendship with Catalina de la Huerta, a former beauty queen who is now a veterinarian, as well as the younger sister of Nilda, who has her own mysterious past.

A Resurrection in Bonners Ferry is about second chances, new possibilities, unexpected romance, a return to a bucolic life, friendship, and baseball. Above all things, it is a tale of the enduring love between a father and his son.