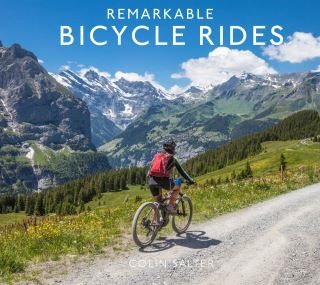 Remarkable Bicycle Rides continues the format established in the best-selling ‘Remarkable’ series, which has combined spectacular photography of popular and niche sporting venues from around the world.

Remarkable Bicycle Rides includes a wide variety of cycling challenges from the exhilaration of high alpine trails to more gentler touring routes, such as Hadrian’s Cycleway, which crosses from Britain’s Solway Firth to the North Sea following the line of Roman monument Hadrian’s Wall.

There are the classic mountain climbs beloved of followers of the Tour de France and the Giro d’Italia, such as the climb to Mont Ventoux in France and the Stelvio Pass in Italy. Still in Italy, there is the mass participation of L’Eorica, a bike tour in traditional costume on vintage bikes.

For those wishing to push themselves to the very edge (literally) there is the Yungas Road in Bolivia whose alternative name is El Camino de la Muerte (Death Road). Long-distance trails, such as the Great Divide (Canada/USA) and the Great North Trail (England/Scotland) can form an epic trip of a lifetime, or be tackled in smaller sections. On more robust wheels there is the A-Line single track in Whistler, Canada, and The Whole Enchilada in Moab, Utah.

If you like your cycling on a flatter incline, many routes follow old railway beds, such as the Hiawatha and the Katy Trails in the USA, P'tit Train Du Nord (Canada) or the Parenzana (Italy/Slovenia/Croatia), plus many of the European routes follow great rivers.

Colin Salter is a keen cyclist. Based in Edinburgh he has completed the arduous North Coast 500 by bike and written Remarkable Road Trips, which was nominated for the 2019 Stanford Travel Book Awards.