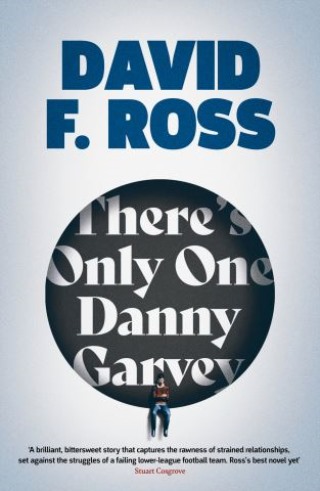 There's Only One Danny Garvey

A promising young football player returns home to his tiny village, his dreams in tatters and a dark secret haunting his conscience, in a beautiful, unforgettable novel about hope and redemption, when everything seems lost...

'A brilliant, bittersweet story that captures the rawness of strained relationships, set against the struggles of a failing lower-league football team. Ross's best novel yet' Stuart Cosgrove

Danny Garvey was a sixteen-year old footballing prodigy. Professional clubs clamoured to sign him, and a glittering future beckoned.

And yet, his early promise remained unfulfilled, and Danny is back home in the tiny village of Barshaw to manage the struggling junior team he once played for. What's more, he's hiding a secret about a tragic night, thirteen years earlier, that changed the course of several lives. There's only one Danny Garvey, they once chanted ... and that's the problem.

A story of irrational hopes and fevered dreams – of unstoppable passion and unflinching commitment in the face of defeat – There's Only One Danny Garvey is, above all, an unforgettable tale about finding hope and redemption in the most unexpected of places.

'By turn hilarious and heart-breaking, more than anything Ross creates beautifully rounded characters full of humanity and perhaps most of all, hope' Liam Rudden, Scotsman

'A warm, funny consideration of reconciliation between middle-aged friends and a celebration of music's healing powers. Suggest to fans of Nick Hornby' Library Journal

'Warm, funny and evocative. If you grew up in the eighties, you're going to love this' Chris Brookmyre

'Dark, hilarious, funny and heart-breaking all at the same time, a book that sums up the spirit of an era and a country in a way that will make you wince and laugh at the same time' Muriel Gray

'This is a book that might just make you cry like nobody's watching' Iain MacLeod, Sunday Mail

'Crucially Ross's novel succeeds in balancing light and dark, in that it can leap smoothly from brutal social realism to laugh-out-loud humour within a few sentences' Press & Journal

David F. Ross: David F. Ross was born in Glasgow in 1964 and has lived in Kilmarnock for over 30 years. He is a graduate of the Mackintosh School of Architecture at Glasgow School of Art, an architect by day, and a hilarious social media commentator, author and enabler by night. His debut novel The Last Days of Disco was shortlisted for the Authors Club Best First Novel Award, and received exceptional critical acclaim, as did the other two books in the Disco Days Trilogy: The Rise & Fall of the Miraculous Vespas and The Man Who Loved Islands. David lives in Ayrshire.