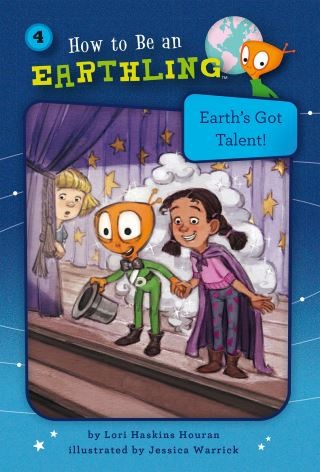 Acting like an Earthling isn’t easy! Follow the adventures of Spork the alien in the How to Be an Earthling series. Each book covers a different character trait to help kids think about what they say and do.

It’s showtime! Shy Grace has a secret—she loves to sing. She hasn’t told Spork or even her best friend, Trixie. Now the class talent show is coming up, and Trixie wants to do an act together. How can Grace tell Trixie she wants to go solo? And is she really brave enough to sing in front of everyone? Every How to Be an Earthling title includes fun back-of-book activities that build on story themes. (Character trait: Courage)

Lori Haskins Houran: Lori Haskins Houran has written more than twenty books for kids (not counting the ones her flarg ate). She lives in Massachusetts with five silly aliens who claim to be her family. Jessica Warrick is a semi-digital illustrator specializing in children's books. She is a self-taught artist who has honed her craft by drawing aliens, sandwiches, and bizarre-looking people. She lives in Florida.