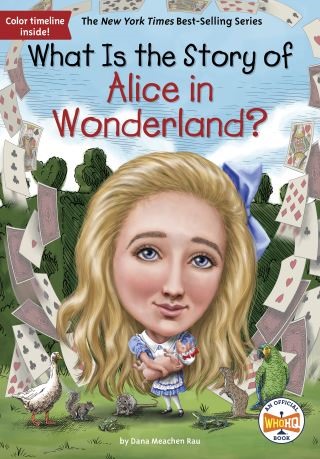 What Is the Story of Alice in Wonderland?

Who HQ brings you the stories behind the most beloved characters of our time.

Find out how Alice in Wonderland became a children's classic.

Published in 1865 by British author Lewis Carroll, this fantasy adventure story introduced the world to Alice and introduced Alice to some very strange but beloved creatures, including The White Rabbit, the Cheshire Cat, the Mad Hatter, and The Queen of Hearts.

This silly tale that started out as a collection of stories written for one little girl became so popular that even Queen Victoria, the British monarch, couldn't put it down! Lewis Carroll, whose real name was Charles L. Dodgson, went on to write several sequels and other books, but Alice's Adventures in Wonderland and Alice through the Looking-Glass are by far his most famous stories.

Author Dana Meachen Rau takes readers through the book's history--from Carroll's initial inspiration--Alice Liddell--all the way to the movies, plays, and other adaptations that are entertaining fans today.