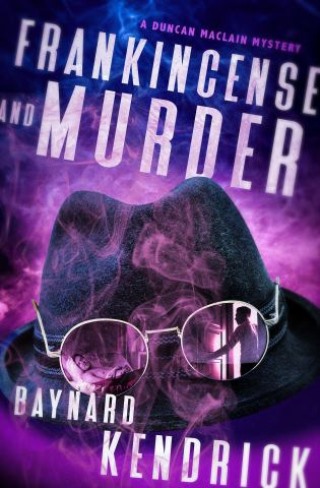 When a party is spoiled by murder, a blind detective must sniff out a killer, in this mystery by the author of The Aluminum Turtle.

Following the loss of his sight in World War I, ex–intelligence officer Capt. Duncan Maclain honed his other senses and became one of the most successful and well-known private investigators in New York City . . .

There’s a swinging cocktail party at the Upper West Side apartment of brothers Herb and Andy Bolin. The two accountants have invited plenty of guests, including their dear friend Captain Maclain. But not everyone is in good spirits when the detective arrives. Herb is in a financial jam and has been using alcohol and sleeping pills to cope. He picks a fight and is carried to his bedroom to sleep it off—only to never wake again . . .

Herb’s doctor declares it was the pills and booze that did him in. But Maclain’s powerful nose knows better: he smells cyanide. Certain of foul play, Maclain must attempt to solve the case. The trouble is Herb has a long list of enemies, and picking up the killer’s scent won’t be easy . . .

Baynard Kendrick was the first American to enlist in the Canadian Army during World War I. While in London, he met a blind English soldier whose observational skills inspired the character of Capt. Duncan Maclain. Kendrick was also a founding member of the Mystery Writers of America and winner of the organization’s Grand Master Award

Baynard Kendrick:
Baynard Kendrick (1894–1977) was one of the founders of the Mystery Writers of America, later named a Grand Master by the organization. After returning from military service in World War I, Kendrick wrote for pulp magazines such as Black Mask and Dime Detective Magazine under various pseudonyms before creating the Duncan Maclain character for which he is now known. The blind detective appeared in twelve novels, several short stories, and three films.