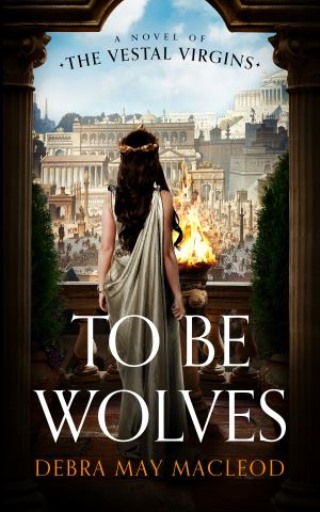 A Novel of the Vestal Virgins

In the stratified world of ancient Rome, there are citizens and slaves, soldiers and senators, priests and priestesses—and Caesar Augustus rules them all. Yet his authority holds only as long as the people believe the gods of Rome support him, particularly the beloved goddess of the home and hearth, Vesta.

As chief Vestal Virgin, Pomponia continues to devote her life to protecting her order and the eternal flame of Vesta. She has risen to a position of esteem in Rome and is a valued member of Caesar’s inner circle. But now a contagion ravages the city and tension rises among Rome’s inhabitants.

While she struggles to manage the Vestal order and maintain the favor of the goddess, Pomponia must now face a malevolent nobleman, Soren, whose machinations against her threaten not just her friendship with Caesar, but everything she loves.

In To Be Wolves, Book Two in the Vesta Shadows series, Debra May Macleod takes us back to her richly crafted and meticulously researched vision of ancient Rome, artfully re-created with both historical and all-new characters, from conniving elites to celebrity slaves. An even bolder offering than its predecessor, this gripping sequel to Brides of Rome explores an even darker side of Rome.

The Vesta Shadows trilogy spans decades, from 45 BCE to 14 CE. It follows the life of the Vestal priestess Pomponia Occia, who is inspired by the real Vestal Occia who lived during this time, serving in the Temple of Vesta for more than fifty years. Set during the tumultuous years that saw the fall of the Roman Republic and the rise of the Roman Empire under Augustus—and beyond—it dramatizes some of the major historical events that occurred during her lifetime while simultaneously bringing ancient Rome to life with fast-paced, engrossing, and visceral storylines played out by a striking cast of characters.

Debra May Macleod is an author of historical fiction focusing on the ancient Roman religion of Vesta and the Vestal Virgins. She is privileged to have been invited to participate in research excursions in the Forum Romanum, the Forum of Caesar and Imperial Fora, including places inaccessible to the general public, and informs her writing and work with this invaluable perspective. Debra has a bachelor of arts (English, classics) as well as a law degree. She lives in Canada with her husband and son, visiting Italy often for research (and sun).