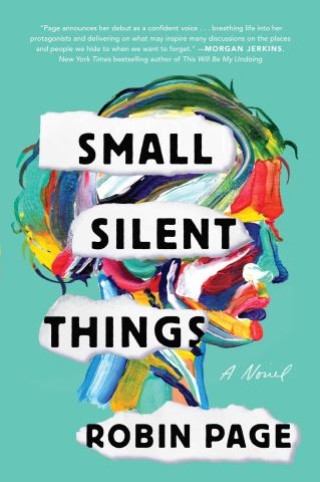 “Robin Page balances the quiet exterior with her characters’ public selves and the quiet, intense rage that burns alongside the trauma that they carry. For this, the novel’s title and the pages that follow are a promise fulfilled. Page announces her debut as a confident voice with much depth both within her lines and in the pockets of space between them, breathing life into her protagonists and delivering on what may inspire many discussions on the places and people we hide to when we want to forget.” — Morgan Jerkins, New York Times bestselling author of This Will Be My Undoing

A lyrical, haunting debut that explores the power of parenthood, identity, lust, and the legacy of trauma, as the lives of two neighbors are upended by ghosts from their past lives.

When the news of her mother’s death reaches Jocelyn Morrow, it stirs up memories of her traumatic childhood. She is a mother herself now, to six-year-old Lucy; living a life of privilege in Southern California with her husband Conrad; moving in a world of wealthy white women, even though she is not white; as far away from her past as she can get. Her designer clothes cover a net of scars across her back, and she hides an even deeper mark—a fundamental stain, something she believes invited her abuse. She also has a blossoming secret: she is becoming obsessed with Kate, her tennis coach.

Her neighbor Simon Bonaventure is a successful landscape architect and a Rwandan refugee. He too is haunted, by the wife and daughter who were taken from him in the genocide twenty years ago. The ghosts of those he could not save, and those who took them, are never far, and now he has received a letter—allegedly from his daughter, grown, and full of questions for a father she doesn’t know.

As Jocelyn and Simon begin a tentative friendship, they forge a bond out of their dark secret histories—a bond that may be their only hope of being pulled back from the abyss.

Robin Page: Robin Page was raised in Cincinnati and has degrees from UCLA and UC Irvine’s MFA program. She lives with her husband and daughter in Los Angeles, and has powerfully mined her experience as a displaced Midwesterner, a woman of color, and a mother in these pages.