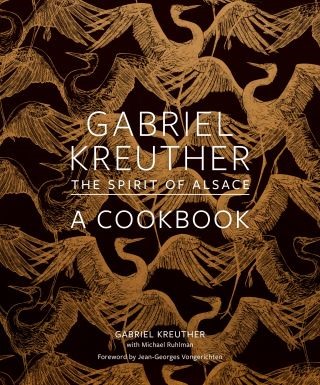 The Spirit of Alsace, a Cookbook

Gabriel Kreuther is the cookbook fans of the James Beard Award-winning chef have long been waiting for. From one of the most respected chefs in the United States, this cookbook showcases the recipes inspired by Kreuther’s French-Swiss-German training and refined global style, one that embraces the spirits of both Alsace, his homeland, and of New York City, his adopted home. Sharing his restaurant creations and interpretations of traditional Alsatian dishes, Kreuther will teach the proper techniques for making every dish, whether simple or complex, a success. Recipes include everything from the chef's take on classic Alsatian food like the delicious Flammekueche (or Tarte Flambée) and hearty Baeckeoffe (a type of casserole stew) to modern dishes like the flavorful Roasted Button Mushroom Soup served with Toasted Chorizo Raviolis and the decadent Salmon Roe Beggar’s Purse garnished with Gold Leaf.

Featuring personal stories from the chef's childhood in France and career in New York as well as stunning photography, Gabriel Kreuther is the definitive resource for Alsatian cooking worthy of fine dining.

Gabriel Kreuther:
James Beard Award winner Gabriel Kreuther is the executive chef of his eponymous restaurant, which opened in New York City in 2015. A recipient of two Michelin stars, Kreuther has garnered accolades from every major food critic and culinary media outlet. He’s been inducted into Relais & Châteaux’s restaurant association and is a member of the Bocuse d’Or Culinary Council. Kreuther has also served as the executive chef at The Modern in the MOMA and the Atelier at the Ritz Carlton.
|||
Michael Ruhlman is the author of critically acclaimed books including Grocery (Abrams, 2017) and From Scratch (Abrams, 2019). He has collaborated on several bestselling restaurant cookbooks, including The French Laundry Cookbook, Bouchon, and Alinea.