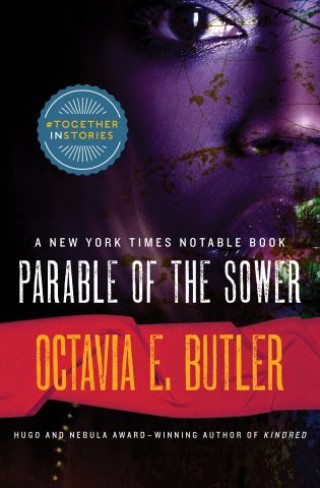 Parable of the Sower

A New York Times Notable Book: In 2025, with the world descending into madness and anarchy, one woman begins a fateful journey toward a better future.

Lauren Olamina and her family live in one of the only safe neighborhoods remaining on the outskirts of Los Angeles. Behind the walls of their defended enclave, Lauren’s father, a preacher, and a handful of other citizens try to salvage what remains of a culture that has been destroyed by drugs, disease, war, and chronic water shortages. While her father tries to lead people on the righteous path, Lauren struggles with hyperempathy, a condition that makes her extraordinarily sensitive to the pain of others.

When fire destroys their compound, Lauren’s family is killed and she is forced out into a world that is fraught with danger. With a handful of other refugees, Lauren must make her way north to safety, along the way conceiving a revolutionary idea that may mean salvation for all mankind.

This ebook features an illustrated biography of Octavia E. Butler including rare images from the author’s estate.

Octavia E. Butler:
Octavia E. Butler (1947–2006) was a bestselling and award-winning author, considered one of the best science fiction writers of her generation. She received both the Hugo and Nebula awards, and in 1995 became the first author of science fiction to receive a MacArthur Fellowship. She was also awarded the prestigious PEN Lifetime Achievement Award in 2000. Her first novel, Patternmaster (1976), was praised both for its imaginative vision and for Butler’s powerful prose, and spawned four prequels, beginning with Mind of My Mind (1977) and finishing with Clay’s Ark (1984).

Although the Patternist series established Butler among the science fiction elite, it was Kindred (1979), a story of a black woman who travels back in time to the antebellum South, that brought her mainstream success. In 1985, Butler won Nebula and Hugo awards for the novella “Bloodchild,” and in 1987 she published Dawn, the first novel of the Xenogenesis trilogy, about a race of aliens who visit earth to save humanity from itself. Fledgling (2005) was Butler’s final novel. She died at her home in 2006.